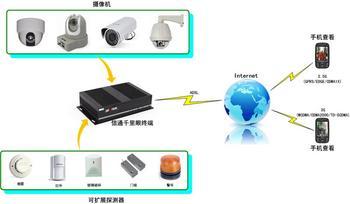 The expansion of the video surveillance market and the supply of demand If technical preparation is the cornerstone of market development, the expansion of user groups and demand are the real source of market development. The video surveillance industry has formed a mature industrial value chain and has formed a relatively stable user base. The future development and change of the market will require new and realistic motivations to trigger and promote. Now these drivers are clearly presented.

1. The expansion of the market from the perspective of user groups Video surveillance The traditional user group is medium-sized group users, such as financial and electric power users. It is these users that support the development of the digital monitoring market. With the external social environment factors (domestic harmonious society construction, international continuous terrorist incidents), and the security market itself continue to work hard, the recognition and acceptance of video users by the average user continues to increase. The direction of expansion has been clearly presented: First, the ultra-large group users (city-level video surveillance systems), such as the "3111" project; Second, small and medium-sized users, the most economically active factors in China's small and medium-sized business institutions (accounting for With 99% of the total number of domestic companies, the proportion of GDP has exceeded 50%, providing up to 75% of employment opportunities, and individual users, the application prospects for online video have already clearly emerged.

2, from the application type to see the expansion of the market The traditional application of video surveillance system is a security precautions, mainly to solve the traditional three major security risks (human injury, natural disasters, production and life accidents). With the development of the entire information industry, it has become clear that the video surveillance system has developed in two directions: First, it is developing applications for large-scale, intelligent, and professional security systems, such as China's safe city applications, professional industry supervision applications, etc. The second is the development of consumer applications and visual management applications, such as tourism websites and chain stores supervision.

3. The supply of demand The rapidly growing industry is focusing on core users, striving to provide better products for existing customer groups and markets, and at the same time it should pay attention to the development of innovative new products and open up potential user groups. With the expansion of the user base in the video market, the potential demand is transformed into a real market. First, the industry needs technical preparation, and more importantly, it opens up the value chain of access to the user market.

4. It is difficult for a single security application to meet the diversified market demands Traditional security video applications, and the interests of users are more reflected in insurance, deterrence, etc., â€œSecurity is the greatest benefitâ€. The protection of existing interests is only "throttling", but there is no excessive consideration in creating new value for users - "open source".

The main user group of the upstream industry in the existing industry is the security demand group. From the perspective of the enterprise, more services are provided for existing user groups and markets. Existing channels lack the ability to find, collect, and visually manage new user groups, and analyze, establish, and provide services for them.